Three chapters of Off My Rocker chronicle the creation and evolution of Kenny & the Kritix, a band I put together on a dare in 1980, at the age of 32. It was my first and only band.

With the help of one of my favorite musicians, bassist Mark Andes (Spirit, Jo Jo Gunne, Firefall, Heart), I assembled an all-star band for two performances at the Blue Note in Boulder on December 3–4, 1980. It was supposed to be a one-shot deal, but the response was so life affirming that I fronted several versions of Kenny & the Kritix for the next three and a half years. 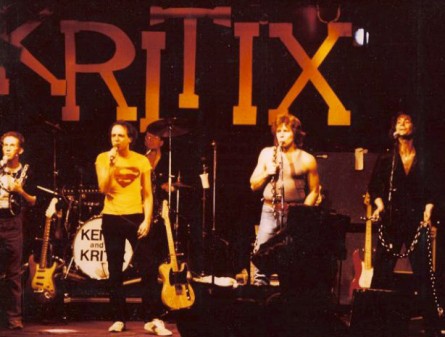 The Kritix were lucky enough to garner a lot of curiosity, a large following, media attention, and the support of young television and video producers in the Denver area. Here are some examples of the fun we had together:

1982: A rockumentary on Kenny Weissberg of Kenny & the Kritix, produced and directed for KBDI-TV (Denver) by Michael Drumm.

Check out Kenny & the Kritix on YouTube for more live performances and TV shoots, along with rehearsal footage and two scripted introductory/encore videos used during our live shows.